CureUp
Home Eating Disorder Bulimia How My Quest For Love Led Me To Finding Love In Myself... 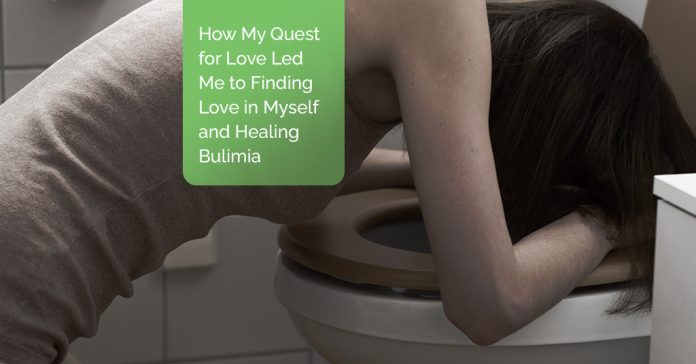 I was 22 years old when I first tried to vomit my food up intentionally. I remember the night very well, I had been at a friend’s house, and we were eating dessert. I really wanted more dessert but I also felt guilty because of all the extra calories I was consuming from eating that dessert. At the time, I was an avid calorie counter, I would count every single one, but I would also give myself some “nights off” where I would conveniently leave the calories off my spreadsheet. This was one of those nights.

When I returned home, I remember thinking to myself how convenient it would be to throw the dessert back up again, so I could “erase” the damage. I don’t know where the idea came from, I don’t recall ever reading much about Bulimia or even thinking about it at all. It’s just something that popped into my head. It seemed harmless at the time. So I gave it a go and wasn’t successful, but I kept trying, and eventually, it came out. I remember that feeling so well, it felt so good, so freeing, and like such a relief.

And so, it continued.

But it didn’t just stop at me throwing up when I’d overeaten, it developed into me intentionally planning and buying foods to binge on. I would finish work and walk around in a trance-like state to my “favourite” food places where I could buy things to binge on, just so I could throw them back up again as soon as I got home. Sometimes I didn’t make it home and I found myself in public toilets, feeling disgusting, and hoping no one could hear me in the cubicle next door.

As you can imagine, calorie counting got quite challenging with all of this going on, but those binge calories were always excused.

Sometimes my method of purging would be to exercise the calories away, even though I knew I would need to be running on the treadmill for days to get rid of them. It still felt better than the thought of allowing them to just sit there, festering in my body.

Other times I turned to laxatives, another ineffective method, and terrible for the digestive system.

I had countless health scares, including two visits to the emergency eye hospital fearing I had caused long-term damage to my optic nerve, every day I would inspect my teeth for more enamel wear, I had burst blood vessels on my face, sores on my knuckles and a constant preoccupation with food, as well as feelings of shame and guilt, disgust and despair.

After 15 years of this, I almost felt like I had surrendered to it, therapy had never helped and I didn’t see a permanent way out. In fact, I was more concerned with finding love.

That’s what led me to a love coach named Lucy, who I came across through an FB ad. I almost didn’t take the call I’d booked with her, but I am so glad I did.

My work with Lucy, disguised as finding love with another, led me to find love with myself. We uncovered childhood wounds and false beliefs that I had lived with unknowingly that had been running my life, and running my Bulimic behaviours. Through the deep intense work in that 8-week coaching program, as well as some incredible somatic releases in the Kundalini activation ceremonies I attended during the same period, I accidentally healed my Bulimia.

I wasn’t trying to, I didn’t realise I was, all I knew was that one day I had the urges, and at some point, during that period the urges went away. I didn’t have to resist them anymore, because there was nothing left to resist.

Since then I have studied and certified myself in countless modalities so that I could help others achieve the same healing. My journey has led me to find incredibly effective techniques that allow me to replicate the healing that I achieved with others, so they too can find recovery fast and forever.

It’s my greatest joy and my life’s purpose to help others on this journey. Eating disorders are not something that you need to live with, recovery is possible, and it doesn’t have to be hard. I know that it can seem scary to make that change, to take those first steps, but I promise you, it is worth it.

P.S. I did find love, with my soulmate Erik, with whom I had already found love with years earlier. Sometimes it just takes a redirection in life, and a renowned love for self, to find yourself with the person who you were always meant to be with.

Katherine Chivers is a Trauma Therapist and Life Coach specialising in Bulimia and Binge Eating Disorder.

How I Got Over My Binge Eating Disorder