Your Health. Your Story.
Home Anxiety Feeling Normal for the First Time at 65 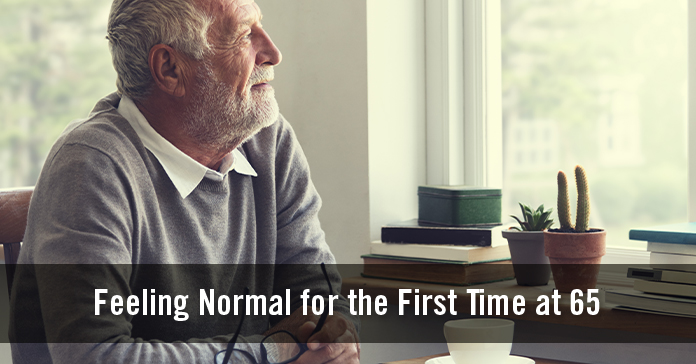 I have walked hand in hand with depression, anxiety, PTSD since I can remember. I was an abused child and never remember not having Anxiety or PTSD! The depression came later. My brother was 5 years older than me and was very jealous that he was an only child until I came. My arrival ruined that for him so he tried to eliminate me from the family in multiple ways which I survived, too, but has left me bruised and bleeding too many times. He said that he would “kill me” if I told on him, so I was terrified to say anything to our parents other than I fell or some other excuse.

My parents finally caught him trying to suffocate me with a pillow and when they were working he was sent to my grandma’s and a nanny was hired to watch me. Well ”Martha” the nanny was very old and very nasty. I would be locked in a closet. If I so much as peeped while her shows were on, I would spend a lot of time in the closet. One day, my parents came home early and I would not come out of the closet. Martha was never to be seen again.

By the time I was 7 years old, I had bleeding stomach ulcers. My first bout with depression was about when I was 8 1/2. I wanted to die and tried but failed. I spent some time in a psych. The hospital put me on meds and sent me home. I started seeing a therapist, and the cycle began.

Over the next 20 years, I attempted suicide multiple times. I spent many months at a time in psychiatric institutions. All I wanted was to be dead! After a particularly messy auto accident, I was sent to a teaching hospital.

Buy this time I was also quite addicted to heroin and PCP. I wasn’t there by choice. I heard the psychiatrist that was assigned to me saying to a nurse that I was a hopeless case and that they’ll get me detoxed and let me out. The next day a young doctor approached me and said he would be my attending physician as the doctor that was formerly assigned to me was having me discharged. The young doctor intervened and asked if he could take my case on, and was allowed to.

We began a long journey with multiple medications and the last med he started me on worked! I actually had some hope for the first time in my life. No medication is perfect and over the next 43 years, I spent one time every 2 years in a psych hospital for med readjustments.

A couple of years ago the med just stopped working and I started feeling like I did many years ago and started planning to kill myself. I always read a lot and kept up on the newest medications and treatments, and came across some articles on mushrooms used for depression and a drug called Esketamine (Spravato). I found a psychiatrist that was doing trials with the Spravato and got accepted.

After 6 weeks, I was still really depressed and was giving up hope, but I marched on. At 8 1/2 weeks, I decided that I was not going back and told the doctor. He was disappointed but was okay with my decision. He did say that if I changed my mind I could continue the treatment.

At this time, I was really finished and started to make arrangements for after I died. For some reason, I decided to go for one more treatment. When it was done, I was outside the office waiting for my ride and I crying my eyes out knowing the med didn’t work and what was in my eyes left for me was death. To my surprise, I woke up the next morning and felt a lot better than I had for years!

It’s been 6 months since i started Spravato and I have never felt this “NORMAL” ever! I started intensive therapy to deal with the emotions and feelings I am getting, but you know at 65 years old I have a new lease on life. For the first time in my life I’m experiencing what “NORMAL” is and I’ll let you know whether I like it or not!

A Step Towards Recovery from Anxiety