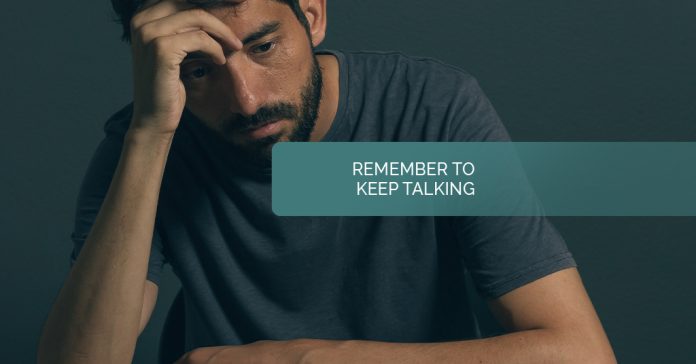 I wanted to introduce myself so here is a chapter from my life.

My name’s Mark, I’m a 49-year-old family man. I work in Forensic Mental Health full-time and a day a week for a local charity. In my spare time I spread awareness on Mental Health encouraging men to reach out and talk.

Around 2014, I experienced a breakdown whilst at work. This was a build-up over time of ruminating thoughts, questions about my past and generally a feeling off emptiness. This was the catalyst to my depression, sleep deprivation to which triggered repetitious low moods, uncertainties around my childhood. I didn’t access professional help for some time thinking it would go away, however this was the decline in my Mental Well-being.

I came from a working-class background in the Northeast and grew up with both parents, a sister who is five years younger than me. My mother gave birth to me at the age of sixteen which I can only imagine was a very difficult experience, having to prioritize her life to accommodate a baby living on very little income. My father worked in the steel works. Both parents came from large families themselves. It appeared my parents lived their lives as young children without love and affection in an environment with strict rules. This I feel filtered down into my childhood.

Growing up, I felt alone in the world, disconnected from society with a sense of isolation. I experienced social awkwardness, feeling like a misfit. I didn’t understand sarcasm, and would mask my interpretations on how I really felt inside. I enjoyed the things young boys generally got up to, playing football, “tadpoling” and just being out with school friends. Although I didn’t have a “best friend,” I really wanted one trying to fit in with my peers, always playing the fool. Playing the fool appeared to attract others which made me feel I had some connection with appreciation. I remember climbing tall trees, looking out in to the distance sensing such peacefulness, a place I could escape to. I recall at bedtimes rocking my head side to side, banging it against the wall. Sometimes at night I would sleep on the floor with a blanket for comfort and would often play by myself with my toy cars.

My family and I moved away from the northeast in the mid 80`s moving to Lincolnshire due to my father starting a new job after being made redundant from the steelworks. This job was presented to him by a family friend we knew whom had previously made the transition to Lincolnshire. We moved into the same street as this family and spent a lot of time in each other’s homes. There was a time I experienced an episode of sexual abuse by a neighbor who was looking after me and my sister while my parents were out. I never told anyone until 2019. I was never given any physical love from my parents, i.e., a cuddle or affection. This became a way of life and as I grew older I learned to mask my emotions internalizing them without telling anyone, yearning to be told “I love you son,” or shown some form of affection, being praised and having some quality time with my family.

As I matured into a teenager I became rebellious, difficult at times, treating the family home as a hotel still frustrated with feeling alone. At school I continued to play the fool, experiencing episodes of anger, not in a physical way but in a way I only knew to communicate how I was feeling. Eventually I was expelled from school and my parents felt that they couldn’t cope any longer. This led me to being placed into care. I remember that day very well as I caused damage to the property out of confusion, feeling frustrated, not understanding the circumstances why I was there. I was then transferred to a children’s home eighteen miles away. Most days I would sit on the big wooden gate at the front of the building wondering why I was there. One day I decided to run away, spending time sleeping rough under bridges, anywhere I could find shelter, sometimes sofa surfing at friends until I was eventually caught by the police, and returned to the care home. At times my parents would visit with a social worker to talk, however I didn’t understand what was being discussed.

Eventually I returned back to the family home and things appeared to be ok, time passed and I was placed into the care of a friend’s parents. I remained with my friend and his family for a long period still feeling lost, alone without any direction or connection to life. Eventually I moved out, got my own place, and started working to support myself. Later on in life, my parents separated. My father moved back to the Northeast to be near family. I followed my father back to the Northeast moving in with him for a brief time. I enrolled in a Military college, passed out with a distinction and joined the British Army, but I was subsequently medically discharged. It felt almost like life just kept kicking me down.

In 2001, I met a girl, settled down and started a family built a home together. The breakdown as I mentioned earlier had a detrimental impact on my life. I became very withdrawn, felt I had no purpose with constant worries that I was a burden. My marriage suffered eventually and all that I had was gone. Depression became very aggressive and I started to have suicidal tendencies, even after I had historically attempted to take my life I felt in that dark fog yet again.

In 2017, I met my current partner who gave me support, love and affection with an abundance of encouragement. I realized I had to see my GP, who referred me to talking therapies. This didn’t alleviate my situation so I was referred for psychotherapy. This didn’t help, too. Eventually I was referred to my local Mental Health team. By this time, I was experiencing long sustained periods of low moods, watching & listening to the same material on YouTube, and feeding my already suppressed mindset with ruminations. I was struggling with sensory overload, dissociation issues, and still feeling all alone. The Mental Health team on my initial assessment reviewed my medications and started me on a course of new ones which for a short time supported my needs until my sleep pattern declined rapidly causing me to feel exhausted with everything. The Mental Health team also indicated I may have Autism, which at first confused me although after I had researched Autism I connected with many of the traits. I began to understand myself, how I functioned and that I wasn’t a misfit of society.

Today, my depression is still evident at times but with coping strategies and medications, I felt settled about the future, I have support from my partner who is with me every step of the way. I still work and support my family and I continue to keep talking about my emotions with support from the Mental Health team. I continue to move forward with my recovery. Remember to keep talking.

I am an American Curbside Caregiver …my view from the streets

How I Helped MCC Win the Vally of the Sun Bowl