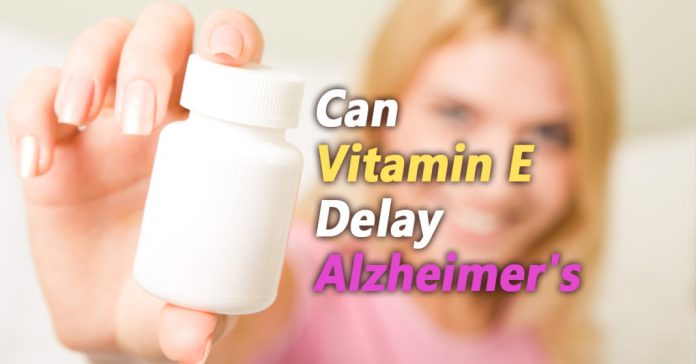 Vitamins are a group of substances that are essential and needed for normal cells function, growth and development of body organs and overall sound health. There are 13 vitamins that are essential for proper body function. These vitamins are so vital to good health, and they include Vitamin A, Vitamin B1 (thiamine), Vitamin B2 (riboflavin), Vitamin B3 (niacin), Vitamin B5 (Pantothenic acid), Vitamin B6, Vitamin B7 (Biotin), Folate (folic acid and B9), Vitamin B12 (cyanocobalamin), Vitamin C, Vitamin D, Vitamin E, and Vitamin K. These Vitamins are grouped into two categories namely Fat-soluble vitamins (this include Vitamins A, D, E, and K) which are stored in the body’s fatty tissue and Water-soluble vitamins (the remaining nine vitamins). It is important to understand the roles and functions of each of the above-stated vitamins in the body but in this article, the role of Vitamin E shall be discussed and how it can help to slow down or delay the progression of Alzheimer’s.

Alzheimer’s disease (AD) is a neurodegenerative disorder that is associated with aging and characterized by progressive memory loss and cognitive deterioration. Alzheimer’s Disease is a debilitating disease that affects the elderly people mostly in their dotage stage. Pre-senility actually begins around age 40s and 50s which eventually progresses to dementia and total senility, or helplessness within the age 65 and 85. Dementia describes a loss of mental ability associated with the gradual death of brain cells which makes the total brain size shrinks because the tissue has fewer nerve cells and connections. Alzheimer’s is the most common form of dementia that causes problems with memory, thinking and behaviour which eventually interferes with everyday activities.
The symptoms may include memory loss that disrupts daily life activities, unable to plan and solve a problem, time and place confusion, having difficulty completing common or routine tasks, unarticulated speech, misplacing items, social withdraw, poor judgment and mood/emotion changes.
Alzheimer’s patients’ brains have plaques and tangles, or a protein build-up between nerve cells and protein build-up inside nerve cells. Though ordinarily, plaques and tangles tend to develop as people grow older, however, patients with Alzheimer’s have much more than average.

Vitamin E is one of the powerful fat-soluble antioxidants in the body also known as tocopherol. This is to say that it protects body tissues/cell membranes from harm caused by substances called free radicals (by neutralizing it), which can damage cells, tissues, and organs (and even the entire body system). Vitamin E is believed to play a vital role in certain conditions related to aging. It has been proved that Vitamin E also helps in promoting cardiovascular health, enhancing immune system function and aiding skin repair. Vitamin E is also important for red blood cell formation and contributes to proper blood flow to the heart, absorption of vitamin K, which is important for blood clotting as well as cognitive health and function. Among other functions of Vitamin E is that it protects body’s store of Vitamin A and fat from destructive oxidation, strengthens capillary walls, combating menstrual cramp, prevents loss of other vitamins, lowers blood cholesterol and fatty acids, and regulation of protein and calcium metabolism.

Vitamin E can be found in nearly all foods we consume on daily basis but some food items have a larger percentage of Vitamin E in them.

(b) Fruits High in Vitamin E: Fruits are generally rich in Vitamin C and are not the best sources of vitamin E, however, the good amounts of Vitamin C provided in these fruits cooperate with vitamin E as an antioxidant. Such fruits that are rich in Vitamin E include Mamey Sapote, Avocado, Mango, Kiwifruit, Blackberries, Black Currants, Cranberries (dried), Olives (pickled), Apricots, and Raspberries.

The Rationale Behind Consuming Vitamin E to Delay Alzheimer’s Disease

Vitamin E is considered generally important for its antioxidant and antibacterial effects which makes it essential for fighting off invaders and preventing the spread of free radicals in the body. Vitamin E, as well can effectively improve cognitive performance in aged human being and prevent oxidative damage. This will happen because there will be a decrease concentration of oxidized protein in the brains thereby making them make fewer errors and have greater memory retention. Research has also shown that Vitamin E supplementation protects against the deterioration in passive avoidance response. So it can be concluded that consumption of Vitamin E and its supplements may delay the progression of Alzheimer’s disease in the adult and as such everybody is enjoined to take the fruits, vegetables, seed and nuts, and the cooking oils stated above as good sources of Vitamin E.