Your Health. Your Story.
Home Alzheimer's Disease What’s The Average Age Of Being Diagnosed With Alzheimer’s Disease 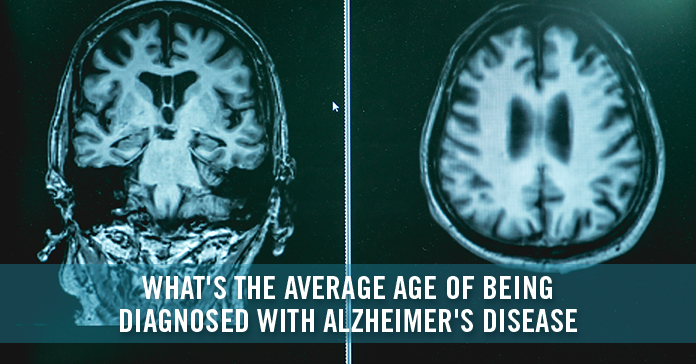 Alzheimer’s is a type of disease that is also termed a degenerative brain disorder. This illness mainly breaks down and tends to destroy the brain cells and all the neurons that connect the brain into one another. This disease might result in a decline in mental capabilities, behavior, and even memory. Each and every person suffering from this disease might show different symptoms. For many, the disease progresses very slowly and can thereby leave mental function largely intact for many years. However, there can be times when Alzheimer’s aggressively and quickly robs people of their overall memory.

Furthermore, the disease can become severe enough that it can disrupt day to day activities of a person. Today Alzheimer’s is one of the most common causes of dementia in the US. In accordance with the CDC or the Centers for Disease Control and Prevention, almost five million American citizens are suffering from the disease. Scientists and researchers have constantly been studying the disease for long, but there hasn’t been any sort of cure even today. Remember, the overall quality of life is extremely crucial for people suffering from Alzheimer’s. Here in this article we would be broadly discussing the average age of being diagnosed with the above disease.

Early-onset or young-onset of Alzheimer’s is a rare form of dementia that can easily affect people of age much younger than sixty-five. Almost five to six percent of the patients suffering from Alzheimer’s disease tend to develop all these symptoms before the age of sixty-five. Approximately four million Americans which roughly stands at around 210,000 to 250,000, suffer from this particular form of the disease. Most people with this early-onset form of Alzheimer’s tend to develop symptoms of this infection especially when they are between the age of thirty to sixty years.

Most of the people suffering from the early onset of Alzheimer’s have a very common form of the disease termed sporadic Alzheimer’s. This particular type is not caused by genetics. However, experts till today don’t know why these people suffer from this disease at such a younger age than others.

Furthermore, others suffering from this early-onset form of Alzheimer’s tend to have a disease type which is called familial Alzheimer’s. In most cases, they are likely to have a grandparent or parent who has also developed Alzheimer’s at a very young age. The young-onset form of Alzheimer’s that runs within families is linked with three different types of genes- The PSEN1, the APP, and the PSEN2. These genes are different from the APOE gene that increases the risk of being affected by Alzheimer’s in general. In case anybody tends to have a genetic mutation even with any of these three genes, they might develop this disease even before the age of sixty-five.

Remember the key care elements of this disease are support and education. This is especially true in the early-onset form of Alzheimer’s given its unique sort of challenges. Remaining connected to several types of services such as support groups can help in identifying better resources, gain a deeper understanding of the problem and learn several ways to adapt to the disease.