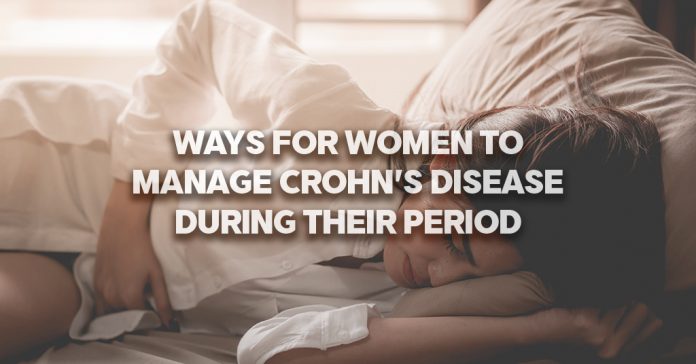 Before discussing ways to manage Crohn’s disease during women’s period, what is Crohn’s Disease? What are the symptoms? Crohn’s disease which is also known as ileitis or regional enteritis, is a disease under a group of disease known as inflammatory bowel disease or IBD. Crohn’s disease is a long-term condition that causes inflammation of the digestive tract. It can emanate in any part of the gastrointestinal system, the mouth, the esophagus, the stomach, or the large and small intestine. The disease is mostly diagnosed in individuals between the ages of 15 to 35. And if the disease is not properly managed, it can be very painful and life-threatening.

The symptoms of Crohn’s disease depend on the part of the gastrointestinal system that is affected and its severity. Some of the symptoms are chronic diarrhea, abdominal pain, intestinal ulcer, fever, stunted growth in children, nausea and vomiting, rectal bleeding, weight loss, etc.

The specific cause for Crohn’s disease has been discovered yet, but it can be transmitted through the genetic materials in a family. It can be due to an abnormal reaction of the immune system, whereby it attacks essential bacteria, food, and other beneficial substances as if they are harmful substances in the body. In turn, this leads to the accumulation of white blood cells in the area, causing inflammation.

CROHN’S DISEASE AND WOMEN. Although abdominal pain is a potential symptom for the disease, women experience more symptoms than men due to the development they go through, like menstruation. Other symptoms women experience are irregular periods, iron deficiency, fertility issues, and dyspareunia (when women have pain during sex).

As discussed earlier, Crohn’s disease affects menstrual cycle by causing irregularities in a woman’s period. Crohn’s disease causes inflammation, which can alter levels of the hormones that control your menstrual cycle. This can lead to more irregular periods. And most people have uncomfortable symptoms like bloating, cramping, and mood swings during their menstruation period, which can get worse if not properly managed.

There are several things that can be done to manage the disease’s symptoms like bloating, cramping, diarrhea, and others, during the menstrual period. Some of the precautions are discussed below:

Keeping to these instructions will definitely help you reduce the pain during menstruation, and also putting your body back to condition close to normal. There is no cure for Crohn’s disease yet, only managing it can help prevent things from getting worse.

What to Eat and What to Avoid With Crohn’s Disease

Changes to My Periods

My Daughter Has Eczema

The Journey of Pain

The Road to Nowhere