Your Health. Your Story.
Home Multiple Sclerosis One Day, I Woke Up Blindsided (No Pun Intended) 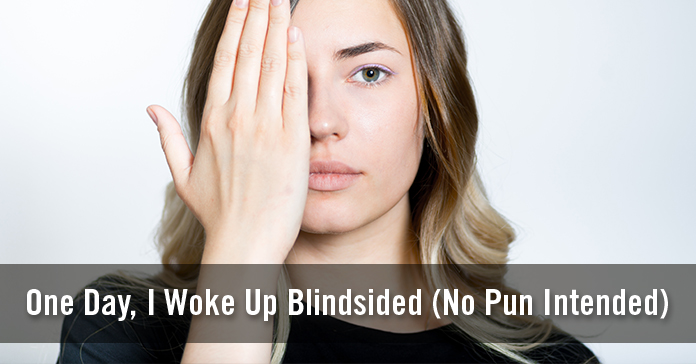 MS. What is “MS” exactly? Is it an acronym, a personal title, an honorific, or can we go so far as to say that it can refer to a ‘Mac Sandwich’? Although all of the above can be true in normal cases, MS stands for something different in both my world and the medical world. Yes, it is an acronym, yet it does not stand for fast food; it refers to a chronic disease, multiple sclerosis. It is an illness I’ve been dealing with for the past nine years.

It all began in July 2012. I was just like any other 17-year-old. I had big dreams and ambitions; I felt that they were within my grasp and I had a bright future ahead of me. It was only a matter of time before this optimistic attitude was cut short. I woke up one morning with blurred vision. I thought it was normal at first due to the fact that it was the beginning of my senior year and it could be caused by overstudying or stress. I decided to relax and to take it easy that day – no studying, no reading, no other strenuous activities that could affect my eyesight. That was not the best decision to make at the time; I woke up the next day with vision loss in my left eye. I do not recall ever panicking like that in my life prior to that moment.

Once I told my family, we went to almost every well-known ophthalmologist we have heard of. Most of them thought I was joking or that “it was all in my head” whenever I would tell them, “I can’t see anything!” They were baffled and caught off guard. I eventually checked in with an ophthalmologist that was specialized in the optic nerve. He diagnosed my condition as neuritis and prescribed me IV steroids to speed up the recovery process. I was hesitant towards the mere fact that I had to check into a hospital to take serious medications at the young age of 17. I, instead, ignored my condition and headed back to my books. In about two months, my vision came completely back to normal.

Sadly, my rejoicing did not last long. It was cut short a few months later (April 2013) during chemistry class. My teacher was explaining something about organic chemistry where all of a sudden, I couldn’t see anything with my left eye. I remember barely holding on to myself until I got home. I started crying abruptly scaring my parents to death. “What’s wrong, sweetie?” was the question they asked repeatedly. I responded, “I can’t see, I can’t see, it’s all happening again to me!” My father scheduled an MRI appointment for me. The results weren’t clear enough and didn’t state what I had exactly. For some reason, I had no desire to accept the fact that I had a condition that needed treatment. I didn’t want any distractions, so I went back to focus on my final exams. With perseverance and God’s grace, I was able to get a high GPA.

After being accepted into college, I was able to adapt to my condition. My vision to this day never returned to normal. I pushed it aside and went on with my life until two years later, in my sophomore year in college, I suffered from other symptoms, namely, numbness in my legs and double vision. My father once again kept searching for an optimal specialist, only this time a neurologist. After my neurologist suggested I take two MRIs: brain and cervical cord, the results confirmed that I had multiple sclerosis. It is a date I will never forget: July 1st, 2015, three years after my first symptom. Since then, I’ve been suffering from numerous symptoms such as dizziness, nausea, loss of balance, fatigue, vertigo, numbness, heat intolerance, cognitive difficulties – you name it.

Despite the fact that these last nine years haven’t been easy, I still see this disease as a blessing, not a curse. It has taught me gratitude, strength, determination, perseverance and it has increased my faith in God. If it weren’t for his grace and guidance, I wouldn’t be able to live a life still full of optimism.

There are Many Invisible Symptoms of Multiple Sclerosis, I Feel Worse Than I Look

5 Amazing Self Care Tips During Challenging Times With Multiple Sclerosis