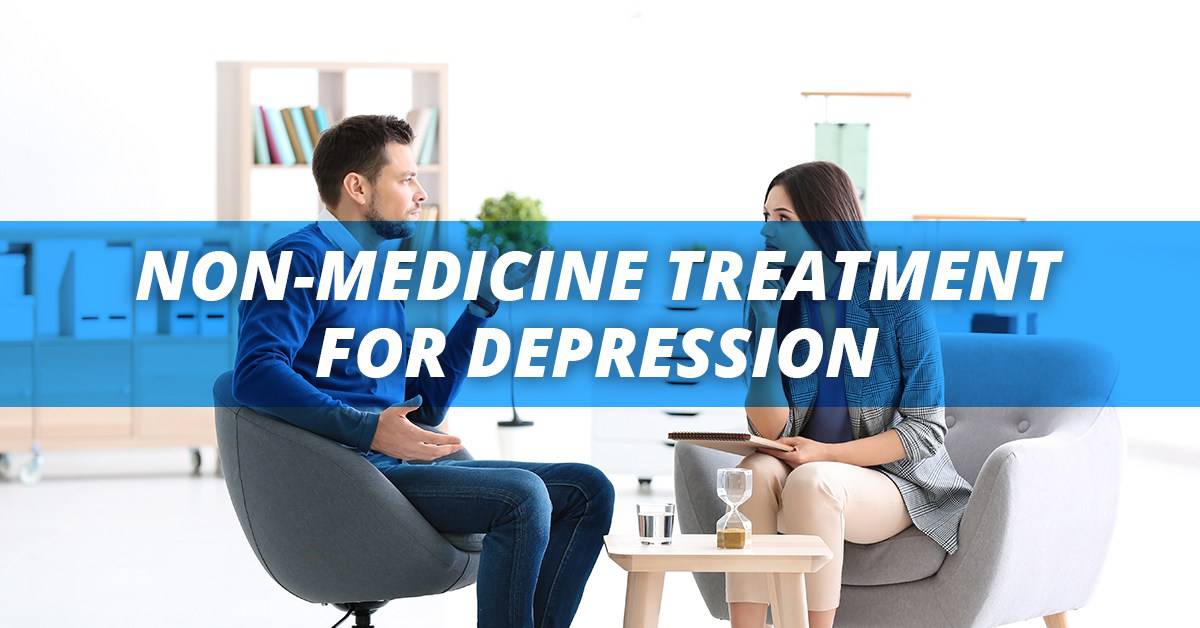 Have you ever tried any non-medical treatment for Depression? Did it work? Share your experience in the comments!

About 16 million Americans experience major depression each year, and many are treated with antidepressant medication. It’s important to remember, though, that there are alternatives. One of these is psychotherapy, which generally has been found to be as effective as medication in mild to moderate depression. Another is transcranial magnetic stimulation (TMS). What they have in common are that they are non-medicine approaches to depression.

Read more: The Incredible History of Where Antidepressants Come From

Let’s look at both of them:

Psychotherapy: There are many forms of psychotherapy for depression, but the two whose benefits have been best confirmed by research studies are Cognitive Behavioral Therapy (CBT) and interpersonal therapy. CBT was originally developed as a treatment for depression, and later its use expanded to insomnia, PTSD, anxiety and some forms of substance abuse. It is very action-oriented, and involves developing coping strategies for specific problems, as well as identifying patterns of thinking which may perpetuate the disorder. Interpersonal therapy is built on the idea that relationships and events in one’s life influence, and in turn are influenced, by one’s mood. Therapy involves dealing with problems in relationships and exploring their connection to symptoms. Both forms of therapy are time-limited, usually 3-4 months or less. In general, they have been found to be as effective as medications with the exception of the more severe forms of depression.

Psychotherapy can be particularly useful in persons who have difficulties with medication side effects, as well as an alternative treatment during pregnancy. It can also be done concurrently with medication, and often is used in this manner.

Transcranial Magnetic Stimulation (TMS): TMS has been found to be helpful when a person has not benefitted from antidepressant medications. It is a relatively new treatment which involves using an electromagnet to send magnetic pulses to the parts of the brain involved in depression. It has been found to be helpful in persons who have not responded to medicines or psychotherapy. Unlike some alternative procedures such as vagal nerve stimulation, it does not require surgery of any kind.

In a typical session, a person sits in a chair for about 60 minutes, while a magnetic coil placed against the head is turned on and off repeatedly, producing a clicking sound. Typically, it is done five times a week for 4-6 weeks. Like any procedure, it can have side effects, which in this case include headaches, dizziness or twitching of facial muscles. It is not for everyone and should be avoided in persons with stents or metal aneurysm clips or pacemakers. Benefits usually appear only after several weeks. It is not known whether maintenance treatment after one has become well will help prevent future episodes, but if depression reappears in the future, new treatments can be given.

The thing to remember is that when a person has depression, there are many options out there. Some involve medications, and some do not. Learning about each, how they work, and their benefits and limitations are the first step to making good choices.

Have you ever tried any non-medical treatment for Depression? Did it work? Share your experience in the comments!

Wallace B. Mendelson is a Professor of Psychiatry and Clinical Pharmacology, Distinguished Fellow of the American Psychiatric Association, and author of UnderstandingAntidepressants.

Up and Then Down