Your Health. Your Story.
Home Schizophrenia “My Sister Published a Book of Lies about Our Family” 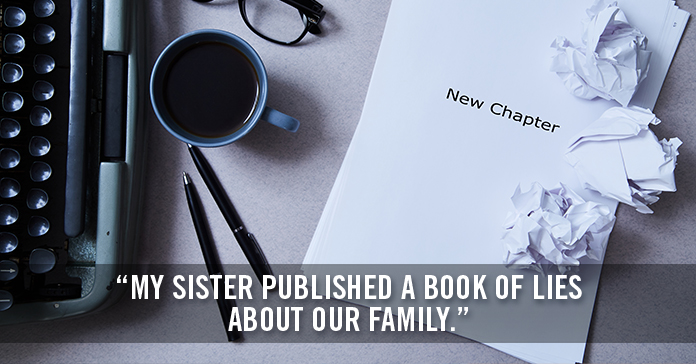 In 2013, I started getting thoughts of superiority and knew from the commanding voice in my head that it was my destiny to write a book then become famous. I never felt like I wrote my book, I always felt that Jesus used me but wrote it for me. I have no recollection of even writing it. I used a credit card and charged over $12k for publishing it through a self-publishing literary agent.

I even quit selling homes as a top-producing Real Estate agent to pursue the voice in my head and was convinced once again that I would become rich and famous. My book was called Chocolate flowers, it was about my mother sexually abusing me while wearing a witch’s mask. I truly believed the things I wrote about to be true. I began getting more orders from Jesus in my head commanding me to do things like picking up dog poo with my bare hands to prove I was worthy of my up-and-coming fame.

I write in to the Dr. Phil show and appeared as a guest titled, “My Sister Published a Book of Lies about Our Family.”

It wasn’t until one viewer commented something about mental illness that I ever even heard of mental illness or the fact that mental illness could be hereditary, both my parents were bizarre and embarrassed me as a child. My mother was diagnosed with 8 personalities and my father was a dumpster driver, pan handler that would just space out and not socialize, known as an oddball.

I’ve been blessed my whole life I guess that my mental illness was never detected but looking back on my life I can clearly recall things that I was unable to understand. My opinion is that the signs and symptoms should be discussed in elementary schools. As I’ve aged and seen my Dr. Phil episode play over and over in reruns, I now feel my purpose is to help others to understand the disease of the mind as I continue my journey as a schizophrenic.

The Other Side of the Coin

Fighting a Losing Battle Against Yourself