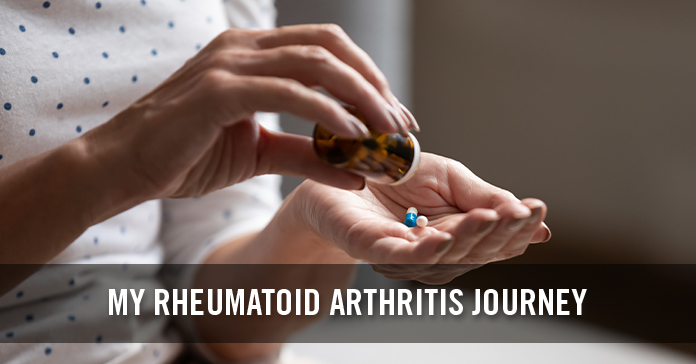 Rheumatoid Arthritis? Well that’s quite bad I thought but why is the doctor crying?

This is what my grandparents had, it made them a crook.

Don’t want to be a crook the doctor says we have many tablets that help you live a normal life.

It sounds good but I’ll take the least strong one first. They have scary side effects.

I rang my mum like a child just before each tablet for a week before I got the confidence to just take without a fuss.

They began working after a few months.

After a few years, I developed a resistance to this drug.

Then I knew why the doctor was crying I couldn’t lift a spoon to my mouth a 5 minutes walk to school for my daughter took 40 mins. I suffered dreadfully so did my children who now had a visually disabled mum.

My housework suffered. I had applied for a home help but wasn’t eligible I came just under the bar.

ALL THE SAME, I GOT ARRESTED AND CHARGED WITH CHILD NEGLECT DUE TO AN UNTIDY HOUSE!

I was found not guilty it was a no crime but that took 1 year and 2 months in the meantime the social services and the family court transferred residency to the father of my daughter. This man suffered from episodic violent outbursts.

So not only was I heartbroken so were my children and hearing my daughter cry and wail on the phone for me will never leave my memory or be appeased, I was concerned for their welfare at their fathers.

My Arthritis got worse, but an ignorant go sought to undermine the consultant rheumatologist and take me off the Arthritis drugs after which I was unable to walk. I have spent the night on 3 years in a wheelchair but this month I’m going back on the stronger drugs I was prescribed first 6 years ago.

This will be welcome but this last year I was in the hospital so my children got told I was going to die.

I was in so much hip pain it was an agony that such strong tablets were presented I was hardly present on earth.

All I can say is don’t move house. If moving house would change your consultant as Arthritis is such a serious disease and waiting lists are so long.

My daughter, I feel like I hardly know her anymore and I’m not well enough to visit her and my ex-doesn’t bring her round only occasionally.

Basically, my life was nice but has been trashed.

I hope to build it back up and begin to know my daughter again. My son stayed with me but isn’t the same person as me after all the heartache of having my daughter taken from my care because my house wasn’t up to scratch and hunky-dory.

How to Manage Rheumatoid Arthritis Flare-Ups