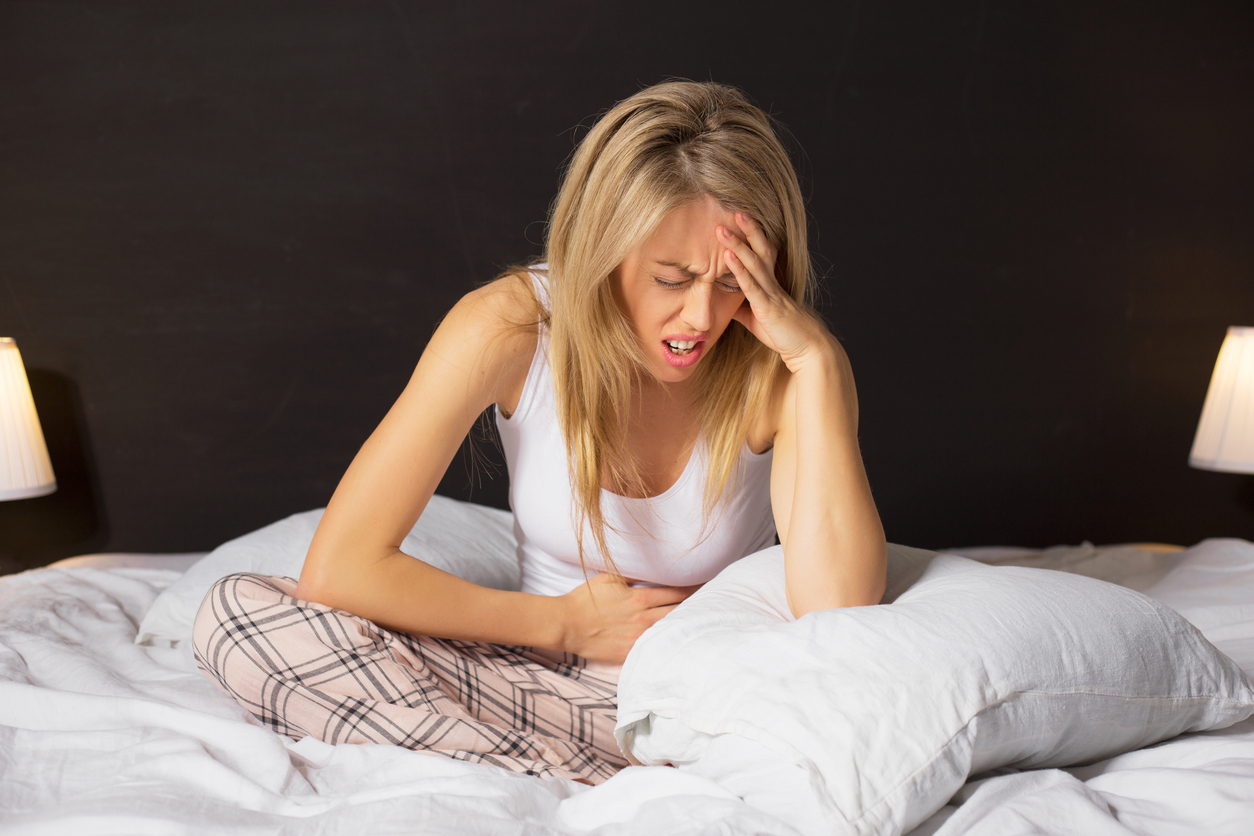 Hi, My name is Sabrina.

I am currently 20 years old. I suffer from an illness called endometriosis. Endo what? Is what you’re probably asking yourself at the moment.

If so, Endometriosis is when the lining of the uterus grows outside of the uterus. It causes Sever pain as well as many other symptoms.

Today I’ll be telling you a bit of my life and my struggle with Endo. It all started when I was 9 years old. Just like any other women out there, I got my period. At the young age of 9 years old, I never knew that a simple period can change my life drastically.

My pains were extremely painful. Here I was thinking that this was normal. I started having major side effects as well.

Extreme nausea came along, as well as fatigue, fevers, swelled up legs, dizziness you name it. A week before my periods, I would curl up in a fetal position and simply cry my eyeballs out. I would be in the sofas agonizing in pain during family gatherings events etc. My body was not used to any of this. I knew this was not okay. I knew this was not normal.

I would see my sisters and there Pains/symptoms were not as hard as mine were. I had finally told my mother enough was enough. I needed to get something for pain as soon as possible. I ended up in the ER for the first time. At only 9 years old. I was terrified! I did not know what to do nor think.

All I was able to think of was the misery these pains were causing me. I just wanted relief. I still remember the Dr’s face that had examined me. That was the first time I felt ashamed. For the first time in my life, a Dr had looked me in the eyes and told me everything is normal. I still remember those words” you are just a girl, it’s normal you will eventually get over it.” How is a 9-year-old supposed to process such thing?

Mind you, this was during my 3rd month of menses. Months went by. As usual, I would end up in the ER at least 15+ times. A 9-year-old. Constantly in and out of the hospital. I would so much school due to this.

My school principal had even called the police due to the number of absences I had. I kept getting so many diagnoses yet nothing was getting treated. I would constantly be admitted and would last at least 2 weeks in there.

Years went by and the exact same thing continued. I got diagnosed with gastritis, then acid reflux. I was out in treatment yet nothing helped. I was sent up to Phoenix to see a specialist in pediatrics.

After further testing, he had planned to do a surgery. As usual, I ended up back in the ER for pain control. My pain was so unbearable, I had to get flown to Phoenix children’s for further treatment. I ended up getting one of my first surgeries in the abdomen. I had my gallbladder removed. Drs has than the thought that I was golden. Unfortunately, that did not happen.

Here I was, back at it again. After more er and dr visits I had gotten diagnosed with IBS. Just like the others, I was put in treatment to seek relief. Yet NOTHING. That’s when my PCP has mentioned to me about an OB-GYN.

We wanted answers and everywhere we looked we never found any. I was then sent to my first OB-GYN appointment. Not even a teen yet, and here I was in the waiting room filled with grown women waiting for a dr to see me.

After explaining my pain and symptoms to this OB. He had decided to pull my mother aside. This dr is telling my mother “perhaps she just needs attention, she’s fine.” I started to cry. I’m fine? I suffer from severe pain daily, I can’t keep foods down whatsoever. My fatigue is extremely horrible. I have no energy whatsoever and this dr means to tell me that I’m fine? I knew this was not normal. I was constantly in agonizing pain. Especially when my menses Hit. That’s when my pain levels would reach the high peak. I was furious! I wanted to convince myself that he was right, but deep down I knew this was not normal. I had multiple surgeries down throughout the years. I saw multiple Drs weekly. Still constant ER visits as well.

Days turned into weeks, weeks into months, and months into years. High school came along. I was extremely excited about all the fun high school memories everyone talked about. Unfortunately, that wasn’t what had happened. Due to the constant loss of school days, I started to lose friends. I was not able to do my second year of cheer due to this agonizing pain that still had no name. I kept getting told constantly my Drs that it was all in my head. That perhaps I should see a psychiatrist. That I just wanted attention. That it was a simple period, to get over it. You’re a girl, it’s normal. It’s a period, it can’t be that bad. I’m sure she’s just seeking for drugs.

Deep down they did not know what was really happening. They did not know that my body was drained from fighting all those days. They did not know all the pain I had to deal with. How do you explain to someone that it is not okay to have this pain? That this is not normal at all. How do you tell your family and friends that don’t believe that this pain is real and will always be real? It still had no name, no proper diagnostic.

After a few more surgeries I had finally gotten an answer. I was a junior in high school. I had a laparoscopy at the U of A in Tucson, Az. After plenty of dreadful nights at ERs, multiple misdiagnoses. Multiple Drs. Multiple rejections, procedures, test and medication treatments. I had finally got a name!

The name of this awful disease that slowly kills me every day. ENDOMETRIOSIS. I was confused at first. I had never heard of such illness. After multiple types of research about this illness, it all started to add up and make sense.

A word that I first hardly knew now haunts daily. Who knew such thing could change my life in such a drastic way. Who knew this darn illness can separate you from many people and make you feel so isolated. I lost so much of my life due to endometriosis.

Still, till this day, I have not found relief from this pain. I’ve got multiple pain Drs and nothing. I have gone through literally all hormonal medications and yet none has helped. I am currently going to PT, pain specialist, advanced OB-GYN.

They have been doing everything in their power to try to control my pain levels. Even after having a diagnostic, I still get constantly told all these harsh things, especially “drug seeker.”

There are no pain-free days for me. I can’t go anywhere without my heating pad, and a bag filled with meds. Meds that Drs say only patients with cancer take, but since my pain and nausea is so horrible, I have to take stronger medication with stronger doses.

That belly that you see. It’s not me being pregnant. It’s just my Endo belly. All bloatedness caused by my Endo. There is not a day where I don’t have to take at least one medication in order to function and pull through the day.

I’m not able to do those normal things everyone else gets to do. While everyone else is having fun, making memories. I’m home laying down agonizing in pain.

At 20 years old, I’ve had 10 abdominal surgeries. Yet, no relief. No, there is no cure. I’ve tried about everything in life to try to get relief. Yet nothing has helped. I was recently told that I was running out of options. That perhaps I should try to conceive. Yet I was told multiple times that there is a good chance I will never be able to get pregnant. I was told to have a hysterectomy. Yet, at 20 years old, no children, no dr wants to do such procedure.

Endometriosis… Endometriosis is a silent killer. It does not kill you seriously, but it does kill you physically and mentally. It’s a word that haunts millions of women around the world.

Having a period or even getting put on pills to stop your period, does not give you relief as well. Well, at least not for me.

Endometriosis has given me daily pains, that I have forgotten what it felt like living at least one day without pain. It’s something that messes with my entire body. My entire right and middle lower quadrant feel like it’s ripping apart. It’s a pain so hard to explain. It’s a daily struggle to try to pull through.I have to live daily with constant people acting like they know what I should do etc. Little do they know what I have to deal with.

Some think it’s a simple thing, but it’s not. It agonizes your body. You will never be the same after you get this illness. You will get to a point where you’re simply tired of all the medications, of all the treatments, visits etc. But, at the end of the day, you simply have to suck it all up and deal with this. You have to learn to love yourself even after all the pain and damage it has caused. You have to learn to manage your energy since it’s so limited. Your body can only take so much. It does not handle a lot of things that other girls can.

You have to learn to listen to your body and care for yourself. When all lights go out and everything is silent at the end of each day, you’ll be the only one who truly knows what it feels like to have to live with this atrocious illness called endometriosis.