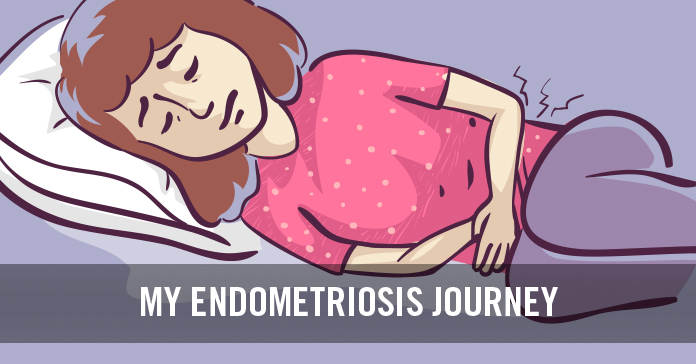 I have suffered since 10 years old when I had my first period. Severe cramps and non-stop bleeding. At age 18, I had my first child and had the Mirena implanted. After 6 months of continuous bleeding, it stopped and I felt good.

In 2012, I met my husband so I decided to take my Mirena out. After I gave birth to my daughter in 2015, I had all my symptoms back but they were worse than ever. I had a tubal ligation in 2017. I felt that my body wouldn’t be able to handle another pregnancy and I didn’t want to put a baby at risk. During my surgery, the doctor didn’t find anything. It was good to go to start my life again.

A short time later, I was having severe shoulder pain with my periods. I felt like I was breathing in glass. My periods were very irregular and I would bleed for weeks on end. The cramps and the migraines were severe. I had many MRIs and had physical therapy for my shoulder. Everything came back normal.

My gynecologist mentioned that I may have endometriosis but we knew that it won’t be fully diagnosed until I had surgery. So I researched and found a specialist in New Jersey. I told him all my symptoms and asked what the rate of it spreading to my diaphragm was. He told me that it was extremely rare and – when it does happen – that the lesions are very tiny and nothing to worry about.

In May of 2019, I underwent robotic surgery in NYC by my specialist. When I woke up, my specialist told me that I had endometriosis in my pelvis deep in the uterosacral ligaments. He was able to remove all the endo from my pelvis. Then came the heart punch. He then showed me the photos of my diaphragm. He said that I was right and that I had 5 large lesions on the diaphragm. He wanted a cardiothoracic surgeon to take a peek at it but nobody wanted to touch it as it’s very rare and a very difficult surgery that has not been done more than a few times.

After 2 months I started having all my pain back. My regular gynecologist and I went through every medicine to make me feel better but nothing worked. At the age of 29, he looked at me and said it’s time and referred me to another specialist. My last hope is a full hysterectomy in the coming months.

I know it’s not a cure and I know it may not stop my pain from the diaphragm as no doctor wants to touch it. I understand the risks. I think knowing that I may have less pain and to be able to be a better mom to my kids is what has made me advocate for myself. Each doctor I have seen has looked at me and said that they’ve never seen a case as serious as mine in the diaphragm. I knew something was wrong and by me researching and advocating for myself I was able to get an answer. No, it’s not what I wanted to hear that your disease is so bad and no surgeon will operate on your diaphragm. I wanted relief. However, in a unique way, I have relief. I know I am a rare case.

I know that I will live with this disease forever but maybe I can have less pain and symptoms to have a quality of life.