CureUp
Home Alzheimer's Disease The Hidden Illness Associated with Nursing Homes. Bedsores and What You Need... 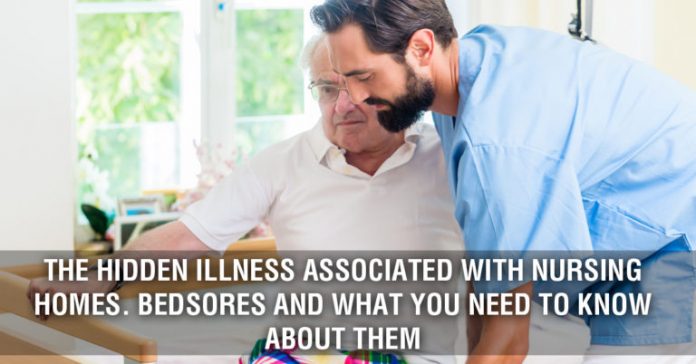 Bedsores is one of the hidden, lesser known, prevalent, yet quite preventable problem of nursing homes.

Bedsores, also known as pressure ulcers are comparatively more common in the elderly population, especially those with disabilities, or difficulties in movements. They may occur in those suffering from neurological or vascular diseases. They are not uncommon in those living with dementia, Alzheimer’s, diabetes, and so on. In fact, research shows that in some nursing homes almost one-fifth of adults have some degree of bedsores. Depending on the severity, they can be classified as stage one to stage four. It should be understood that any kind of bedsores requires immediate medical attention, as they touch the weakest of elderlies and are thus challenging to cure.

These sores occur due to the absence of movement over an extended period leading to disruption in blood flow. In healthy or active individuals, they do not happen as they keep on moving/changing posture while asleep. Thus the parts or body that are continually in contact with bed or wheelchair are at higher risk of developing pressure ulcers (like hip, lower back, spine, tailbone, elbows, heels, and shoulder blades).

Factors that contribute to the bedsores are:

Treatment and prognosis would depend on the severity of bedsores:

Stage 1 – there is reddening of skin, but it is still intact

Stage 2 – upper layer of the skin called epidermis is broken, but ulcer is still superficial

Stage 3 – Ulcer extends deeper into the skin, up to the subcutaneous fat layer

Stage 4 – the most severe form, when ulcer is deep enough to extend up to underlying muscles or even bones

Other factors like size of the ulcer and presence of infection would also affect the chosen treatment.

Bedsores are not always the indicator of inadequate care in elderly, some of the precautions may help in prevention.

I have a Chronic Illness so Don’t Be Surprised If…