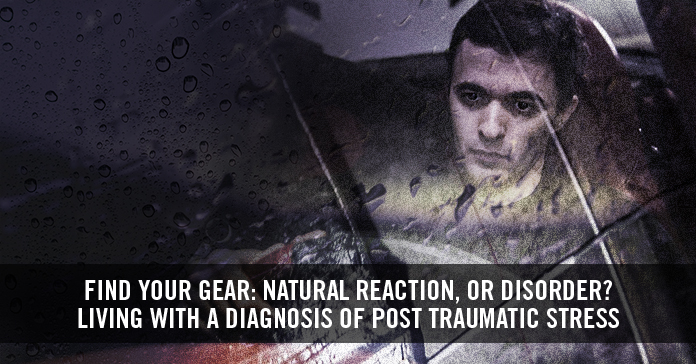 Go out to your car. Start it. Shift it into neutral. (That’s the N.) Hold the brake, so it doesn’t roll, even on a hill. (Safety first!) Now, then step on the accelerator. Give it some gas. Give it some more. A little bit more. Even more.

Your engine should be going pretty good now. You can probably hear it. It may sound like you’re on the highway. If you have a tachometer, don’t let it hit the red zone. That engine should be purring right along.

OK. Ease off the accelerator pedal. Put the shifter back in park, and turn off the engine.

Look around. How far did you get?

What do you mean nowhere? You’re still in your driveway?

That’s what my Post Traumatic Stress Diagnosis (PTSD) feels like to me. The engine’s running at full speed, even hitting that red zone sometimes, but I get nowhere. It feels like I’m living in neutral.

When the shifter is in that N position, it means neutral. The engine is running, but the transmission is not engaged. No matter how long or how hard you step on that gas pedal, the car does not move.

To me, this is how PTSD manifests itself in my daily life. This is what I see and feel. Some days are better than others. Some are much worse. Sound frustrating? IT IS.

I don’t even begin to suggest it is the same for everyone. I’m quite certain it is not. This is how it feels to me. I think, like the events that cause a diagnosis of post traumatic stress, the manifestation is different for everyone.

A disorder seems like something you were born with. By comparison, a diagnosis is a result of something that has happened to you.

I am not bi-polar. That is a disorder. It is a condition people are born with; not a result of something that has happened to someone during their life. For me, the distinction helps. I don’t feel I’m mentally ill, but I do have a mental health condition.

I know. I can see it. Everyone who has ever taken a Psychology 101 class is running to their closets, looking for their dusty text books. I’ll save you the trouble. It’s a coping mechanism. (I took Psych 101, too, and some others.)

But why then do I care about the distinction? Because there is a societal stigma surrounding mental health in general, and PTSD in particular. And I think the same people who are stymied by the stigma are guilty of perpetuating it.

The American Psychiatric Association is responsible for the name “Post Traumatic Stress Disorder.” It is a direct descendant of Shell Shock and Battle Fatigue, among others. And while most of the previous titles are directly associated with war and combat, it was discovered that there was a need to expand the term and its application. It’s no longer the soldier’s disease. It is not a condition exclusively confined to service members.

Natural disasters, domestic violence, rape, terrorism can all cause post traumatic stress. Any traumatic event can bring on this condition, particularly when the effects are not immediately dealt with. The good news is, it is treatable. Therapy and medication are proven, effective treatments.

What is interesting to me though, is the more common definition of Post Traumatic Stress. While the official definition is lengthy and dry, it does clearly state “psychiatric disorder.” The more common definition, widely used by mental health professionals, is a natural reaction to traumatic events. I think the two are mutually exclusive. It can’t be both. It doesn’t compute. So which one is it? Is it a disorder? Or is it a natural reaction?

Now imagine sitting in a shrink’s office. Or laying on a couch, if that is better for you. Which would you prefer to hear: You have a psychiatric disorder, or you have a natural mental health condition. How would you process each statement?

I think most people would interpret the former as “Oh my God, I’m nuts. Am I legally insane? Are large men dressed in all white coming to get me?” As your mind goes to a thousand different extremes you probably won’t hear anything else the therapist is telling you, including that the condition is very treatable.

The latter, a mental health condition, suggests that it is treatable. It doesn’t lead your mind to straight jackets and rubber rooms. It doesn’t send your mind’s eye to Jack Nicholson in One Flew Over the Coo-coo’s Nest. Yet, the same people who are responsible for the definition are the ones who are most perplexed by the stigma attached to it, and all of mental health.

To the members of the APA I say this: Stop crying from your front porch. Every week there is a mental health expert on the news, usually a psychiatrist or psychologist, saying we have to change the perception of mental health. We have to end the stigma.

Agreed. But instead of saying we must “end the stigma,” while offering no path to the desired outcome. Go out to your back yard, and clean that up first. Change the language of your own definition, to properly depict this condition—and probably others. Until you do your part, society will never follow suit.

In the meantime, I will try to get my transmission into first gear each day. Some days I can work through the gears. Other days I’m stuck in reverse. But the most important part is getting up each day, and getting yourself—myself—out of neutral. It’s not always easy. But it is always worth it.

If you suffer from Post Traumatic Stress, know there are effective treatments. Find a mental health professional, talk to your primary care provider, or a clergy member. They can often help making the connection for you. Family and friends can only do so much. They are not a substitute for the proper professional help. But close family and friends may also be able to help you find the proper resources. Please, get the resources you you need. You are worth it!

The author is retired from the United States Armed Forces, and has completed combat tours in both Iraq and Afghanistan.

How to Look and Feel your Best Wherever You Are

The Health Benefits of Learning Piano Later in Life