CureUp
Home COVID-19 Coronavirus History And How It All Started? 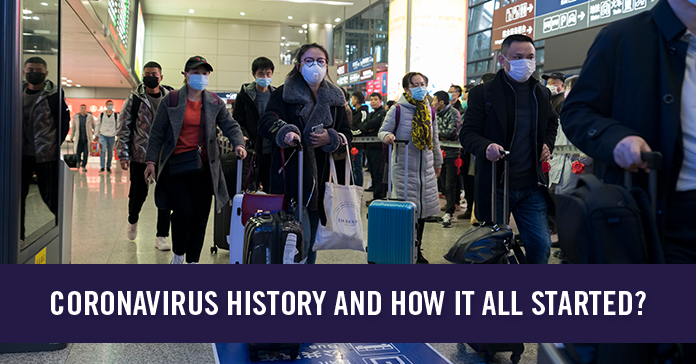 The current SARS-CoV2 or the coronavirus originated from a big family of different virus groups. Some of these viruses are known to cause common cold among people whereas others are known to infect animals such as camels, bats, or cattle. But how did the current COVID-19 virus come into being? Here in this article, we are going to discuss about the same.

Where Did The Coronavirus Come From?

According to some of the global experts, the current SARS-CoV2 virus first originated in bats and it is very much similar to that of acute respiratory syndromes (SARS) and the Middle East respiratory syndromes (MERS). The virus initially made a jump into humans from one of the wet markets of Wuhan in China. These wet markets are the places where consumers buy fresh fish or meat including animals that are killed on spot for their flesh.

Some of these wet markets used to sell banned or wild animal species such as wild boars, cobras, and even raccoon dogs. The crowded condition of these markets can let viruses from other animals swap genes. There are even times when these viruses change so much that it can start infecting and spreading among humans. The SARS-CoV2 virus did spread both in and out of China and it even infected people who didn’t had any direct contact with these animals. Soon within a span of only a few months this virus started to spread its wings in almost all the continents across the globe.

Evolution Of The Coronavirus

The human coronavirus was first identified by scientists in 1965 and the virus was known to cause the common cold. Later in the ’80s, researchers even found a similar sort of animal and human viruses and named them in accordance with their crown-like appearance. Seven different types of coronaviruses have the ability to infect humans. However, the one that is known to cause SARS emerged in the southern part of China in the year 2002 and it quickly spread its wings in twenty-eight different countries. More than eight thousand people were known to be infected in July 2003 and more than seven hundred people died. Again, a small outbreak happened in 2004 which involved only some more than five cases. This form of coronavirus was known to cause headache, fever, and similar other respiratory issues including cough and cold and shortness of breath.

Another form of coronavirus started emerging in Saudi Arabia in the year 2012. Almost 2500 cases of MERS were reported during that time especially to the peoples who lived in or travelled to the middle east. This form of coronavirus was less contagious than its cousin SARS but was defined to be more deadly. MERS caused similar sort of symptoms like that of SARS along with other symptoms such as kidney failures.

I have a Chronic Illness so Don’t Be Surprised If…

HOW DO YOU GET RID OF THE RED VEINS ON YOUR NOSE AND CHEEKS?

TO SOMEONE WHO HAS JUST BEEN DIAGNOSED WITH ROSACEA

My Life Was All Mapped Out Until Multiple Sclerosis Moved In