Your Health. Your Story.
Home Anxiety Life with Bernie: My Non-Hodgkin Lymphoma Story 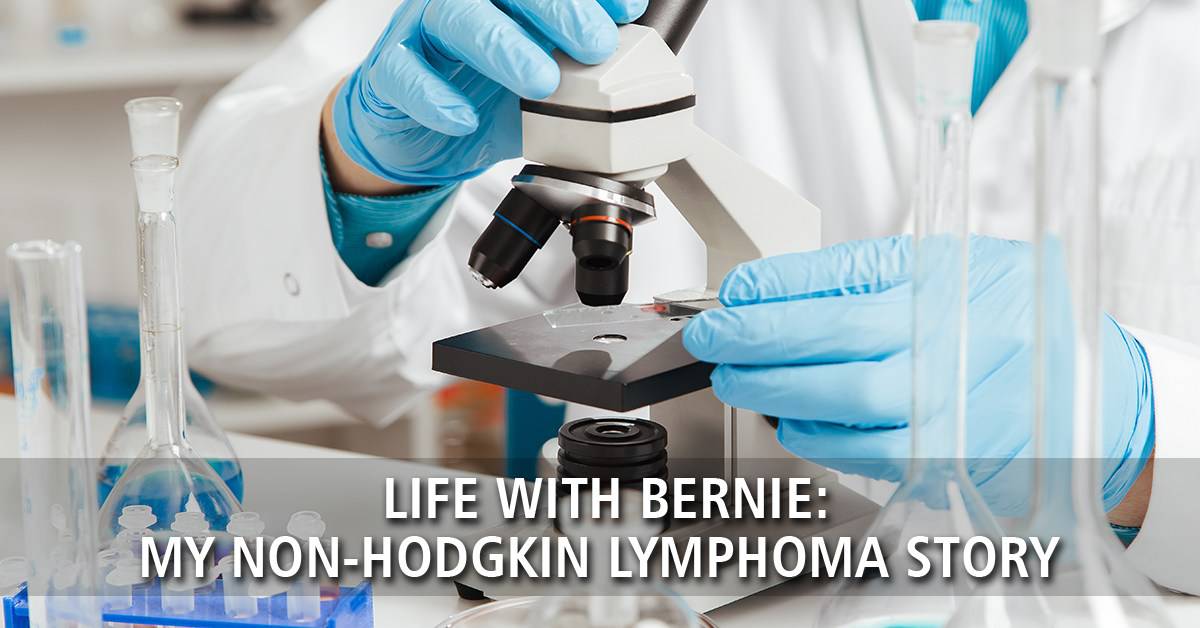 What led you to discover your diagnosis? Share in the Comments and Share the Blog to Raise Awareness!

My life with Bernie: where do I start? From the beginning, I guess. I had been working in the mental health field for nearly two years, part of which was spent on the road to different towns, supporting people with mental health issues. Well, on one trip I was with a co-worker and I said to them that I have a lump in my neck, thinking that my gland was swollen from being sick with a chest infection.

However, it didn’t go away. By this point, it was already the size of a marble, so I took myself to the doctors, as one does. They then sent me off for a biopsy, which came back a bit strange but not quite showing that it had been anything in particular. So, the doctor booked me into the surgeon at the local hospital as he believed it could be a branchial cleft cyst. Yep, I had look that one up.

I took myself to the hospital with a lump that had now grown into the size of, hmm, let’s say a large egg. They took one look and booked me in for a CT scan and another biopsy. Yes, it was a barrage of tests and plenty of sitting around in the hospital and doctor’s waiting rooms, feeling anxious with every interaction.

I experienced a handful of blood tests, being poked and prodded more times than one would wish for. Again, the test wasn’t quite right. So, I had another CT scan and then returned to the surgeon. Let me tell you, by this time I was about 4 weeks into this ordeal with the lump, now forever known as Bernie.

I had attended all of these appointments on my own; a friend describes me as stoic but it was more self-preservation.
I can prevent myself from crying if no one is there patting my leg, holding my hand or asking me if I am ‘okay’. I am not good at showing emotions.

Upon arriving to see the surgeon, I was sitting there going over in my head what this thing expanding in my neck could possibly be – was it cancer or was it just a harmless cyst? I kept having this gut feeling that it was cancer as Bernie had grown to quite an impressive size, like a good-sized fist curled up.

So, I was called in to see the surgeon who sat next to me and said that they would organize another biopsy as the last test wasn’t that conclusive, again. This one would be under anesthetic, where they could cut a chunk out. He then looked at me and said, You do realize that it is probably cancer?” I sucked back the tears, nodded my head and said, “Well, it is what it is, let’s get on with finding out what it is and deal with it.”

Thus begins the process of ridding myself of Bernie. During this entire process, I have had nothing but support from my family, friends, doctors, the wonderful Oncology staff and anyone else I have had the pleasure of interacting with during this time. Yes, I say pleasure as I don’t think I would have been able to get through it if those core people hadn’t been so wonderful.

Not to drag the story out too long, I had R-Chop chemo, which wasn’t fun. It makes you feel sick, I lost all of my hair, had to leave my job, tried to survive on Newstart and minimal savings to cover a mortgage and feed myself during this time. I had more than just Bernie, I had, as my oncologist (I have a slight crush on my oncologist, only because he was just amazing) said upon my return from a PET scan, Bernie had siblings.

Read more: I was Diagnosed with a Brain Tumor

I fought hard to kill Bernie and his siblings off: 6 months of chemo, 2 months of radiation and Bernie and siblings have been melted away. I am just coming up to the end of my 2 years of maintenance with Rituximab and on the 4th of July, I will be done and heading into my remission phase.

What a journey it has been. It’s been emotional, tiring, financially destructive and at times, I have felt alone but I am through that and hopefully, from now on, there will not be a Bernie return. He is forever on my mind and I vigilantly check for lumps to make sure I am not running myself down health wise. I hope he has gone but no one can predict what is going to happen. All I can say is be positive, don’t over-think and definitely don’t delve into every corner of Google looking for answers. That first chemo session certainly feels like a long time ago.

What led you to discover your diagnosis? Share in the Comments and Share the Blog to Raise Awareness!

My Battle with Anxiety