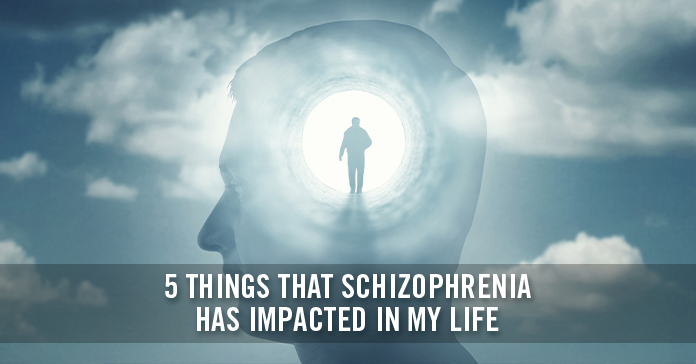 You’re probably going to infer the factually unsophisticated truth about me and my relationship to this article: I have schizophrenia, yes. My symptoms started in childhood, but I wasn’t formally diagnosed with schizophrenia until I was sixteen. Still, such an absurdly complex disease concept is rarely if seldom diagnosed before the age of nineteen, so I’d like to think that having been both a professional journalist for almost twenty years and a paranoid schizophrenic for 32, I have some authority on the issues I’d like to address for those of you whose eyes have made it this far.

While there is no shortage of articles surrounding myths about schizophrenia, or coping tips or techniques, or clinical descriptions and detailed analyses, I’ve come across few editorials on how such an incomprehensible disease has negatively or positively affected such an individual’s life in areas of his or her existence. That said, I wanted to address five things that schizophrenia has impacted in my life. Now, I don’t have much to compare it to since it’s the only reality, identity, and kind of abstract theoretical matrix I’ve ever resided in, but here are some pragmatically salient things I wish more people knew:

To level with you, it’s hard, and it’s even harder to hear people unafflicted with schizophrenia tell you it’s tough. My hope would be, this gives someone some inside analysis and pro tips or may serve as a reference for those looking for more information on the subject. Life is always beautiful, but often living can be difficult.

Alexej Savreux is a writer and artist living and working out of Kansas City, Missouri. He has lived experience with the illness for 32 years and has been hospitalized more times than he can remember. He maintains that there is always hope and goodness and beauty and that no one is beyond repair. At times his editorial and creative practice incorporates themes from his experiences with schizophrenia. His book “Graffiti on the Window” is available on Amazon, Barnes & Noble, Etsy, Lulu, The Book Patch, and wherever fine books are sold.

The Other Side of the Coin